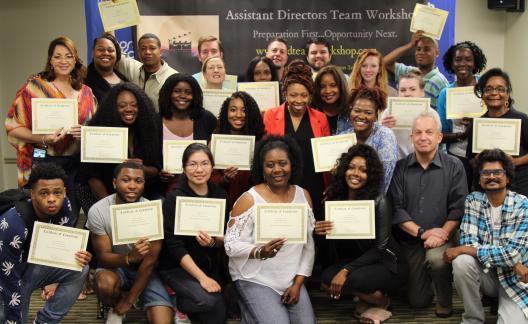 This workshop is now full. If you're interested in receiving information about future workshops, please email Melodie.

Alicia Hailey Daniels’ two-day intensive Assistant Director Team Workshops have trained hundreds of young industry professionals in Georgia, and she has adapted that training into a three-hour online Production Assistant Workshop which Minnesota Film & TV is offering at no charge to Minnesota residents interested in careers in production.

Alicia’s television career began as a trainee in the illustrious Director's Guild of America Training Program for Assistant Directors in Los Angeles, California, where she worked on such shows as ER and Criminal Minds. She has worked steadily since then, with credits that include The Haves and Have Nots, If Loving You Is Wrong, Greenleaf, Cobra Kai, and the feature film Creed (Additional Photography).

Throughout Alicia's fast paced career, she has gained varied experience working with several studios such as Warner Bros, Universal, TPS, Sony, TBS, BET, ABC Family, CBS, ABC, OWN, Lionsgate, and NBC. Her vast experience has shaped her into a knowledgeable Assistant Director for TV, film, and commercials. Additionally, Alicia is an active member of the Directors Guild of America and she had the privilege of serving on the Mentor Committee, African American Steering Committee, 2nd AD Committee, and Women's Steering Committee. She has a passion and dedication to training the upcoming film industry elite. Knowledge is power and it's her mission to share her achievements and failures along the way in hopes of helping others pursue their dreams.